by Pernille Rudlin in Corporate brands, values and mission, Management and Leadership 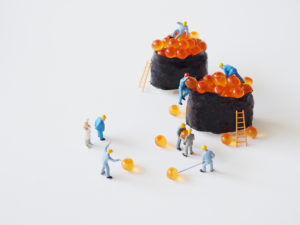 Mitsubishi Corporation has evaded the perennial “death of the sogo shosha” (trading company) threat again, this time by shifting away from resources and commodities.  Non-resource related business now accounts for 70% of its profit, a complete about face from 2011, when it first started categorising its revenues in this way, and non-resource business was 30% of profits.

One contribution to this was Mitsubishi Corp’s acquisition of Norwegian fish farmer Cermaq in 2014, for $1.4bn.  Not only is its production ending up as sashimi in Japan, but it has outlets in the US via supermarket chain Costco. Mitsubishi has also been acquiring businesses in chemicals, automotive, fertilisers and materials sectors and recently raised its stake in Toyo Tires.

Nonetheless, higher resource and commodity prices were a key driver of its recently announced 22% increase in net profit for the last quarter and it has lifted its forecast for the full year to a record level.

It is not being complacent however, as it also announced in its new mid-term plan – to take it through to 2022 – that it will be revising its HR system for the first time in 20 years.  The main change is that the amount of time it will take before a graduate hire can take up a “kacho” grade management position from 20 years (ie not until early 40s) to 10 years. After 10 years, management appointments will be made on merit rather than seniority or which division the person originally came from.

Salary will be based on complexity of the job role, achievement of individual objectives and performance. Depending on performance, salary could be 50% higher than current levels.  Employees above a certain level will also be awarded shares on retirement in order to ensure that company performance is reflected in their compensation.

The current 7 business groups will be split into 10.  6 groups such as “natural gas” and “automotive” will be designated as profit drivers and encouraged to increase profitability. 4 groups such as “petroleum and chemicals” and “industrial infrastructure” will, through restructuring of industries and creation of new businesses, be the growth drivers.

As, like many Japanese companies, particularly the trading companies,  businesses were run on very vertical lines, there was a lack of cross fertilization between groups, so people will be appointed to develop businesses that cut across business groups. A Chief Digital Officer and digital strategy department will also be set up to respond to digitization, artificial intelligence and the Internet of Things.

The Nikkei points out that rivals Mitsui and Marubeni already have Chief Digital Officers and are investing in digital start ups but also that being behind on this does not seem to have impacted Mitsubishi’s top performance amongst trading companies – so far.

It’s often said that Mitsubishi is about organisation and Mitsui about people, if you want to get anything done. So this seems like (a somewhat familiar, from my own experience there 20 years’ ago) attempt to move the company forwards by tweaking the organisation, but also trying to make sure the organisation doesn’t squish the younger people coming up through the ranks – who are an increasingly precious resource in Japan’s ageing and shrinking population.